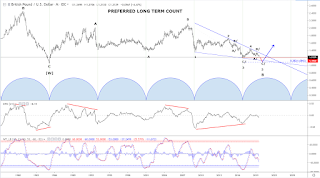 Change of the long-term count


As the former low at 1.1950 is close to being broken, I have reviewed my previous long-term count and find it appropriate to change the count.
Under this new preferred long-term count, wave B is still in motion and calls for a final dip closer to 1.0842 before completing wave B and setting the stage for a new impulsive rally in wave C towards 2.0178 and likely above here too.
A break below 1.1950 will confirm this new preferred long-term count. Even-though more downside is expected, it's important to be aware that this is the final dip in the long-term decline from 2.1166 and all that's needed is a break below 1.1950 to fulfill all requirements to the decline in wave B. So ride this decline with care.

Email ThisBlogThis!Share to TwitterShare to FacebookShare to Pinterest
Labels: Elliott wave analysis of GBP/USD - Change of the long-term count 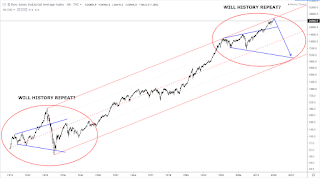 I will let the chart speak for itself...
Posted by Elliott wave surfer at 6:49 AM No comments: 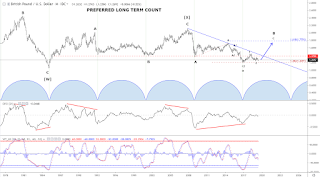 Wave B is expected to be an expanded flat correction

However, the B wave opted for the alternate route, by breaking above 1.4770. I also showed that alternate count for wave B in my June 18 - 2016 update (You can see that post here).

Ideally wave 2 should have completed with the test of 1.2442 at the year-end 2018 and wave 3 towards 1.6345 should be developing. However, the political uncertainty due to the Brexit and shift of Prime Minister in the UK is weighing on the GBP and we might even see Cable break below 1.2442 shortly before starting to move higher in wave 3.

B-waves are notoriously difficult to track and trade. They can take on any shape the want and shift to a new count when you least awaits it.

However, the long-term count remains the same, which is lower to 0.9534 once wave C takes over.

More free articles can be found on my web-site Elliott Wave Surfer. Just sign up it's for free.
Posted by Elliott wave surfer at 8:02 AM No comments:

Email ThisBlogThis!Share to TwitterShare to FacebookShare to Pinterest
Labels: Elliott Wave Analysis of GBP/USD - Wave B is expected to be an expanded flat correction 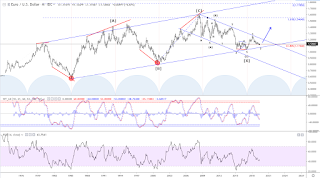 A break above minor resistance at 1.1348 will be a strong indication that wave 2 finally is complete and wave 3 is developing.

More updates can be found on my web-site Elliot Wave Surfer Just sign up as it's for free.

Posted by Elliott wave surfer at 7:42 AM No comments: 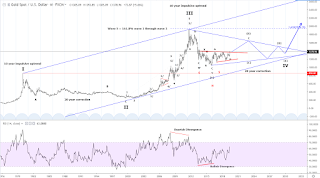 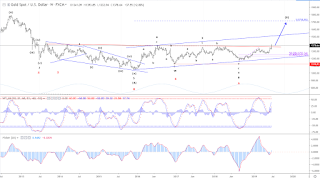 Gold has tried to break above resistance at 1,360 for a long time now and with a clear break above in place, we should see gold continue to climb in the weeks and months ahead towards the 1,710 target.

The rally of the 1,046 low is clearly corrective in nature - Wave B is a triangle. indicating that this rally will be a three wave affair to complete larger wave (B) in a much larger triangle, which I expect will last another 11-12 years before completing and setting the stage for a shot to the moon.

The former resistance near 1,360 will now work as support and protect the downside for the expected rally higher.

More updates can be found on my web-site Elliot Wave Surfer Just sign up as it's for free.
Posted by Elliott wave surfer at 7:20 AM No comments:

Email ThisBlogThis!Share to TwitterShare to FacebookShare to Pinterest
Labels: 360 call for rally towards 1, 710, Elliott Wave Analysis of Gold - Break above 1

Elliott wave analysis for Crude Oil - The corrective rally from 26.06 is now complete 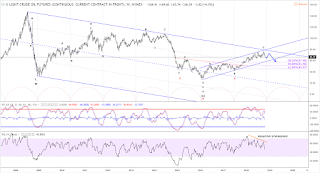 Crude Oil - The corrective rally from 26.06 is now complete

In my June 2016 post I call for Crude Oil to continue to rally towards the long-term resistance line  (you can see that post by clicking here).

Could we see a return and maybe even a break below the February 2016 low at 26.06? Yes! we could. That said, we should be painfully aware, that the corrective rally from 26.06 could become much more complex and the ongoing decline only is a X-wave that binds two corrections together.

What we can rest assure of from here is, a general downside pressure for weeks ahead and a decline to at least 57.48 and likely even closer to 45.47 before the possibility of a new rally to test the long-term resistance line again.

Posted by Elliott wave surfer at 9:15 AM No comments:

Email ThisBlogThis!Share to TwitterShare to FacebookShare to Pinterest
Labels: Elliott wave analysis for Crude Oil - The corrective rally from 26.06 is now complete

Elliott Wave Analysis of GBP/JPY - Look for upside acceleration in wave 3/ of 3 the wonder to behold... 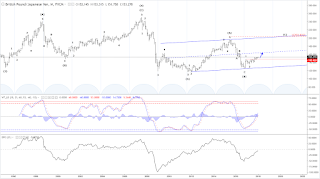 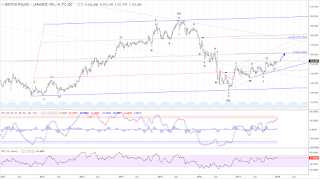 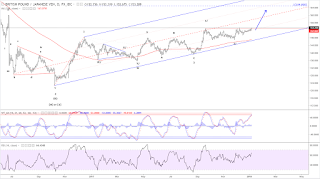 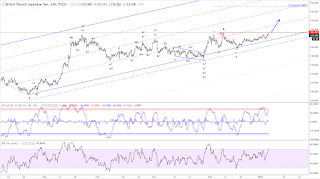 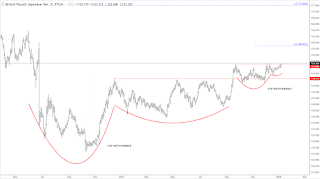 GBP/JPY - Look for upside acceleration in wave 3/ of 3 the wonder to behold...

A break above minor resistance at 153.41 will release a lot of build up energy and should cause GBP/JPY to accelerate higher towards 159.00 as the first minor target, but longer term, a continuation higher to 164.85 and 172.00 should be expected.
The classic technical analysis also shows a nice pair of "Cups with handle" formation ready to take GBP/JPY much higher (see chart 5).
If my long-term count is correct, then we are entering wave 3/ of 3, which normally is the strongest of the waves and the prices action here, often becomes almost vertical.
So be ready to pull the trigger for a nice big rally - "The wonder to behold" as Pretcher says it...

Please note my normal service at www.elliottwavesurfer.com no longer is a paid service - As of January 1 - 2018 it's for FREE!
Just sign up under the "Become Member" button and 4 years of Elliott wave analysis is right at your hand.
Enjoy!!!

Posted by Elliott wave surfer at 7:16 AM No comments:

Email ThisBlogThis!Share to TwitterShare to FacebookShare to Pinterest
Labels: Elliott Wave Analysis of GBP/JPY - Look for upside acceleration in wave 3/ of 3 the wonder to behold...
Older Posts Home
Subscribe to: Posts (Atom)

The Forex Quotes are powered by Investing.com. 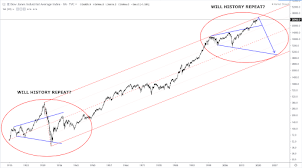 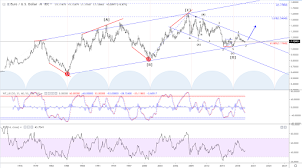 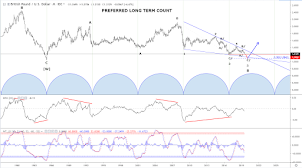 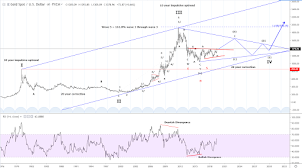 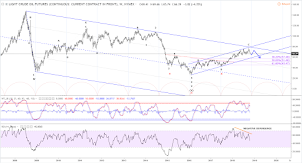 Elliott wave surfer
I'm a keen Elliott wave follower. I do use, what you might call, standard technical analysis too, but my main focus is on the Elliott Wave Principel. I use it professionaly as well as in my private affairs. To give you an example I sold my house in late 2005 and are currently renting a flat, not expecting to reenter the property market before 2012-2013. I'm very much into long term seasonal cycles and demography too. Waiver: I will not accept any responsability for any loss of funds because of any investmenst done on the basis of my analysis. The analysis herein are done with the utmost due dilligence, but can from time to time be wrong and point you in the wrong direction. You are always wellcome to pop me a qustion or comment on my work and I will try to answer your question, but might not allways have the time to do everything. My e-mail is: ews@elliottwavesurfer.com